The photos below were taken on 20th January 2016 when the group went to Belfast to see the murmuration of starlings.

From our trip to Portmore Lough on 17th February 2016.

The Dipper was there all right, phew, and we saw 3 Grey Wagtails – 16th March. The river was stinking of diesel, and we could see it on the water. Phoned the pollution number but no one came out in the time we were there!

Wall-to-wall sunshine on 17th April, and plenty to see. Thanks to Guwain for the photos. 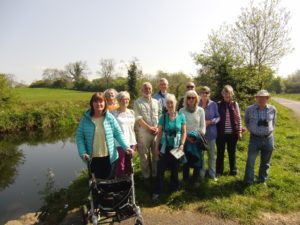 The sun was shining in a clear blue sky, the birds were singing, dogs were being walked and the Six Mile Water was calm and reflective (I mean the water was like a mirror!)
12 of us set off for a gentle walk by the river aiming to identify birds by song and sight. The wild flowers were plentiful and we referred to the field guide when there was a debate. Highlights were Swifts jetting about overhead and 2 buzzards soaring amicably together until one peeled off and dived on . . . who knows?
A Blue Tit had us guessing for a bit as it played hide-and-go-seek in the depths of a bush overhanging the river. We felt sure there was a nest nearby.
A Grey Heron flew gracefully up river towards us on the bridge and landed gently to take a bow. We could now ID (identify) a Song Thrush, Blackcap and Willow Warbler by song alone but it was reassuring to see them eventually, just to be sure.
Then a Kingfisher flew past in a flash of electric blue and most of us caught sight of it as it zoomed up river.
Once again we were glad to share the joy of good company and exotic wildlife in the great outdoors.